Alasdair Haynes, chief executive of Aquis, told Markets Media: “The MAC order type provides large cost savings for banks and end-investors and has seen huge growth despite being in the early stages.”

He continued that there have been days when the MAC market share of total pan-European closing auctions has reached between 5% and 6%. Haynes added that in normal market conditions he expects volume to continue to grow substantially.

Sakeena Lalljee, director of business development at Aquis, said in a blog that approximately 20% of on-order book equities trading in Europe takes place in the closing auctions, but they are still monopolies.

She wrote: “With seemingly no choice but to send their closing orders to those markets of listing, investors are still being stung on many exchanges with the basis point equivalent of landing on Park Lane and Mayfair, complete with hotels.” 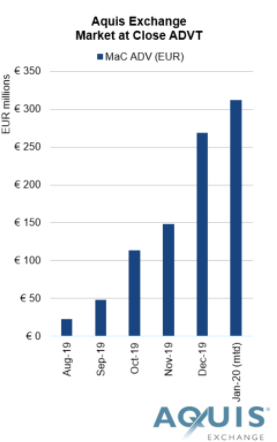 
She added that MaC allows Aquis members to trade at the same closing price as the market of listing closing auction, for a fraction of the cost.

“An average daily value of as little as £20m ($25m) per day would recoup the monthly MaC fee and leave the door open for manifold more in cost savings,” said Lalljee.

Aquis also reported that market share of pan-European continuous trading grew to 4.62% in the fourth quarter of last year, up from 3.8% in 2018.

“Market share has increased as more and more liquidity has became available and we are the cheapest place to trade with less toxicity,” Haynes added. “Our subscription model is proven.”

Aquis operates a lit order book and does not permit aggressive non-client proprietary trading. Haynes compares the subscription pricing model to Spotify as users are charged according to the message traffic they generate, rather than a percentage of the value of each security that they execute.

Haynes said: “As volumes have increased due to high volatility and firms reached the top tier of the subscription, they realised that the marginal cost of more trading was zero.”

Aquis last year agreed to acquire NEX Exchange from CME Group to enter the listings business. NEX, since renamed Aquis Stock Exchange (AQSE), was one of four equities-focused Recognised Investment Exchanges in the UK and a market for growth enterprises. When the deal was announced in July last year there were 89 small companies on NEX’s two markets with a combined market capitalisation of approximately £1.9bn, with five registered brokers and seven market makers.

Haynes said: “NEX is being integrated and will be put on the Aquis trading platform. We knew that 2020 would be year of positioning, and changing the rules, so we can become a competitor to the London Stock Exchange’s AIM and other European growth markets.”

He added that Aquis will be launching a consultation on improving the initial public offering process and secondary trading liquidity, and protecting investors, at the end of this month.

“The first IPO was oversubscribed by institutional investors which is a big change,” added Haynes. “There is a big opportunity as there are good growth companies looking for capital and this a transparent venue.”

The exchange is being run remotely due to the restriction movements from the Covid-19 pandemic.

Haynes said Aquis had contacted the FCA in January to test remote working with skeleton staff the in office for emergencies.

“We were well prepared for remote operations and the system was built to allow us to do that,” he added.

There has been a debate over shortening trading hours in Europe and Haynes argued this is not necessary if staff can work from home.

“Technology is now so good there will be far less travel,” he said. “Things will never go back to the way they were.”

The chief executive continued that Aquis has £11m cash on its balance sheet and so is well positioned to continued investing in technology and people.

“Notwithstanding the impact of the COVID-19 pandemic, our aim is to take the Group to the next level of operational, financial and strategic success in 2020,” said Haynes.